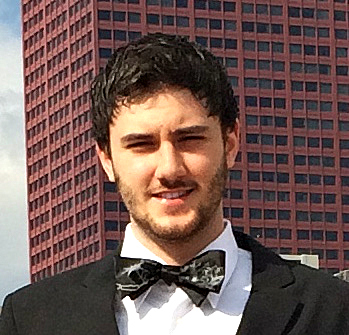 Hi everyone. I'm doing my PhD in the Cognitive Neuroscience program in Psychology. I work under the supervision of Dr. Olmstead in the MotiCog Lab where I investigate the underlying neurobiological mechanisms of anhedonia using a rodent model. Currently, I am working at Harvard’s McLean Hospital under the supervision of Dr. Diego Pizzagalli, where I am conducting a translational project with human participants.

I’ve been a student at Queen’s since 2010. I began working in the animal research facility in 2012 with Dr. Janet Menard, where I worked on a number of projects. For example, I examined whether early adversity increases sensitivity to amphetamine in adulthood. I then collaborated with Dr. Olmstead to investigate the effect of mid-adolescent stress on sucrose bingeing and compulsive responding. In the latter part of my undergrad, I investigated whether the female rat estrous cycle influences sucrose bingeing. In my final year, I completed an honours thesis with Dr. Menard in the Neurobiology of Anxiety Lab. For this project, I investigated whether the lateral septum and anterior hypothalamus act in tandem to regulate specific defensive behaviours.

For my master’s thesis, I investigated whether alterations in the dopaminergic and glucocorticoid systems independently play a role in the etiology of anhedonia. In my PhD, I primarily examine how these systems interact in the development of anhedonia. So far, I have found that dopamine agonism restores reward learning after chronic stress and the stress effect is mediated by physiological and hormonal influences, like adrenal gland functioning and proinflammatory cytokine levels. I continue to investigate individual differences in resilience and susceptibility as well as how these factors contribute to the etiology of anhedonia.

I collaborate with Dr. Kate Harkness and the SARA project, where we investigate the impact of stress on reward responsiveness and anhedonia. With Drs. Harkness and Olmstead, I am currently reviewing the NIMH RDoC framework as a better diagnostic alternative to the current DSM.

Aside from research, I have experience as the co-president of the Association of Graduate Students in Psychology (AGSIP), as well as the Associate/member-at-large on the Canadian Society for Brain, Behaviour, & Cognitive Science (CSBBCS) executive committee. I was the instructor for PSYC371 (Behavioural Neuroscience) and PSYC235 (Abnormal Psychology). I've also TA'd for several courses, like PSYC100 (Intro Psyc), PSYC370 (Brain & Behaviour II) and PSYC375 (Comparative Cognition).

If you’d like to talk to me about volunteering, directed lab projects, 501/grad school/funding applications, or anything else, go ahead and BOOK A CHAT!

All appointments are shown in eastern time (ET)

No available slots for Steve Lamontagne